Our Authority Guides on show

The Authority Guides at Frankfurt

It’s been quite a challenge for the team to get seven books out this year for our new series, The Authority Guides, and I have to say it was quite a proud moment when I got to Frankfurt to present them.

Frankfurt was everything I had been led to expect and more, although the sheer size of the Fair is mind boggling. Each massive hall – and there are several of them – houses every kind of publisher imaginable from every corner of the world. As the Fair progressed, visitors to the stand would feed back on the ‘must sees’. Amongst these was the totally whacky retro gin bar in the Arts section, where a stuffed badger sat alongside the books on the shelves and a mad scientist performed electric shock therapy on unsuspecting visitors. The Hendricks gin they liberally handed out was served with large slices of cucumber and a lecture from the barman on its aromatic ingredients. What does this have to do with books? You may ask. Well it’s a good question, but the gin was certainly welcome after a hard day of meetings.

The international nature of this huge Fair is perhaps the most exciting thing. I’ve never been to a World Cup or an Olympics event, but I imagine they are similar from that point of view. Standing and reading the list of countries represented in the international section, I really did feel that I was in a place where the whole world was meeting. I personally met people from all over including a Russian publisher, two Malaysian distributors, an author from Kazakhstan, now living in London, as well as lots of our European neighbours and, of course, Americans, Australians and South Africans. We talked plenty about all aspects of books and publishing naturally, and we also talked Brexit, Trump/Clinton and the global economy. Every day brought new and interesting conversations with people connected to the world of books. It was fascinating, exhausting and utterly utterly compelling. 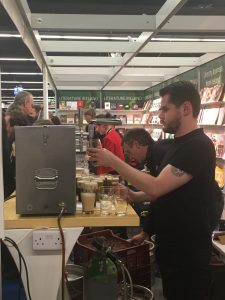 The end of each day brings the stand parties. These of course were amazing networking opportunities – as you had no idea who you might end up chatting to. The IPG stand was next to the Australian Publishers Association so our two parties merged into one as they were held on the same evening. On the other side of us were the Irish Publishers – clearly a favourite held on the Friday night, which was the night when many of the trade hung up their working boots and made merry before the journey home on Saturday. Actual draft Guinness appearing amongst the books was indeed an extraordinary sight!

Frankfurt, you have me hook, line and sinker. I’ll be back!

Publish your book with SRA

Our complete catalogue of services for authors.